On 5 Aug, a retaining wall of a holding pond at the now retired Gold King mine was accidentally breached by workers from the Environmental Protection Agency (EPA), releasing millions of gallons of contaminants into Cement Creek, a tributary of the Animas River. News reports and pictures showed the bright orange plume cascading through towns along the river, especially the recreation hot spot of Durango. This is one of the largest spills in the river since 1978, when the Sunnyside Mine breached the floor of Lake Emma high above Silverton, sending an estimated 500 million gallons of water and sludge into downstream waters. Nevertheless, the Gold King spill caused a spectacular, if transient, spike in concentration of total and dissolved metals in the Animas River – from arsenic to zinc – in a profile pretty typical of concentrated mine drainage oozing from old mines in the San Juan mountains. This mine has been slowly leaching and leaking contaminants into Cement creek for years, and was designated a Superfund cleanup site. The spill was caused during a remediation effort to install a pipe to drain and treat the backed up waters in the mine, but the amount of water and back pressure was underestimated and led to the blow out. 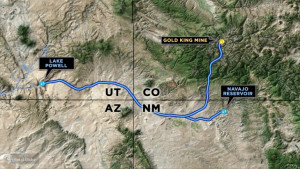 Many are obviously concerned about the long term effects on people and fish along the popular recreation areas and populated regions along the Animas (note that thefisheries of the San Juan were not impacted by the spill). Recently, the EPA released data collected over the past two weeks, which shows surface water metal levels at 24 sampling locations along the watershed below the spill are “trending toward pre-event conditions.” Metal levels in the sediment are below the agency’s recreational screening level. However, environmental officials say their long-term concern centers around the potential for stirring up of sediment during “high-water events” and the sludge’s effect on people who are continually using or exposed to the water for long periods – several weeks – of time. The effects on aquatic life still remain unknown, state wildlife officials say, but no immediate widespread impacts have been observed.