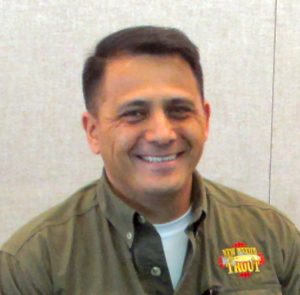 Darian has been an active member of NMT since 2011. He arrived in New Mexico via the Air Force and is still on active duty serving at both Cannon and Kirtland AFB. He’s taken part in the Tingley Beach Youth Fishing Program, Project Healing Water, clinics at the Valles Caldera, and Reel Recovery at Cow Creek Ranch. He continues to volunteer to support the annual Conclave, Fly Fishing Film tours, and support to the sport and gun shows.

After returning from Cannon AFB in Fall 2017, Darian was re-elected to the President’s position he had to vacate when he changed duty stations in 2014. As president, he will build upon past success and broaden the clubs impact in the local community and throughout the state. He enjoys fish the Pecos, Jemez, and San Juan locally.