by Ron Loehman, Conservation Chair
From the November/December 2017 newsletter 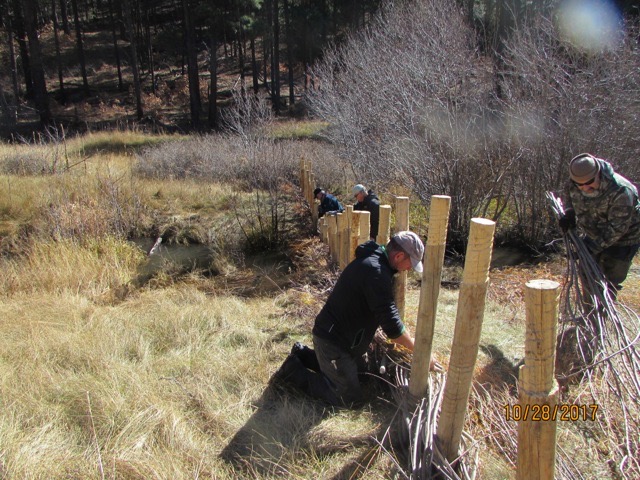 About a dozen New Mexico Trout volunteers spent the last Saturday in October assisting US Forest Service personnel in constructing structures in the Rio Cebolla called “Beaver Dam Analogs” or BDAs. Cecil Rich, the fisheries biologist on the Santa Fe National Forest (SFNF), earlier had proposed and received funding for a stream restoration project inside the exclosures built on the Rio Cebolla to protect the endangered NM meadow jumping mouse. Entry to the exclosures is prohibited while the mice are active. However, the jumping mice hibernate underground away from the stream from about mid-October through early May, so Cecil was eager to get some structures built before it gets too cold to work.

BDAs comprise posts driven vertically across the stream and up the banks on each side with willow branches woven between the posts to a height several feet above the water level. The weave is tight enough to restrict the water flow but not enough to block it completely. Over time the water will rise behind the BDA and spread onto the adjacent riparian area to create additional wetland, similar to the effect of natural beaver dams. Over time the BDAs slow runoff, retain sediment, reduce stream down cutting, and increase willow and alder growth, all of which improve water quality, lower water temperatures, and improve aquatic habitat. 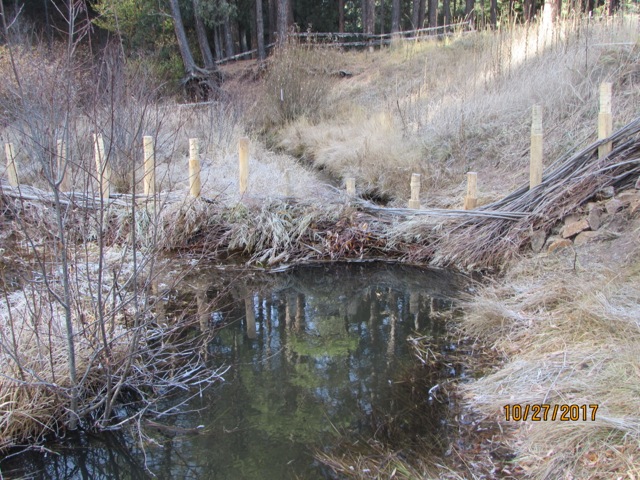 Earlier in the week the SFNF staff had set the posts for six structures and gathered the willow cuttings, as well as stockpiling rocks for armoring the bottom of the willow weaves to prevent undercutting. NM trout volunteers divided into teams and set to weaving the willows through the posts. The work was intuitive and the teams made good progress, especially once the sun hit the work area and warmed things up. By noon we finished all six BDAs and broke for the lunch provide by the Club. The traditional Costco cookies were a welcome reward for our good work.

The project plan is to construct twenty-six more BDA structures, working upstream inside the exclosures all the way to the FR 376-Rio Cebolla junction. We will have opportunities to help with the additional BDA construction, starting as early next year as the weather permits and continuing until the May 1 cutoff. Stay tuned for the announcement of those dates.