From the January 2016 newsletter

Fly, Notes and Photos by Jerry Burton
Used by Permission 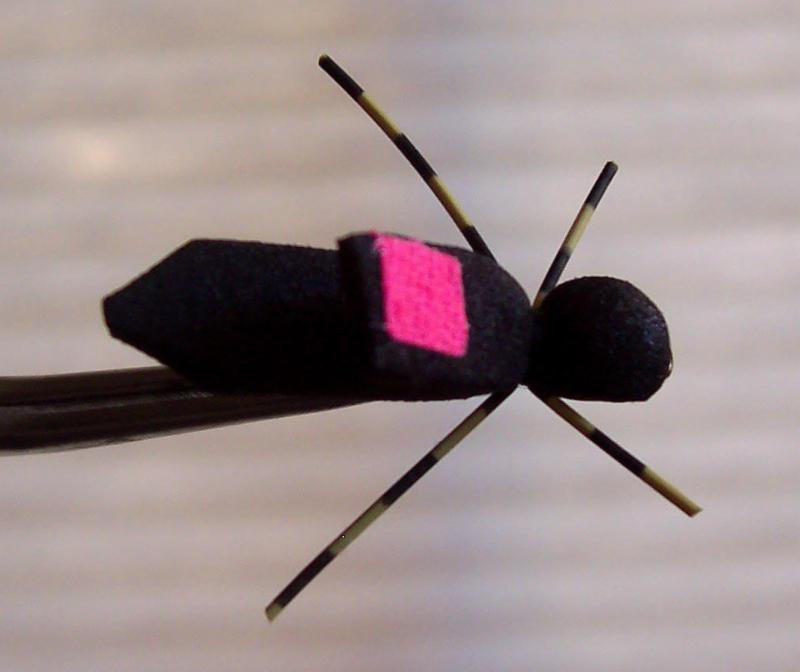 Hook: Size 12 or 14, 2x heavy
Thread: Black 6/0
Body: Thin strip of foam that is wrapped around the hook
Back: 1/4 inch wide strip of foam that is twice as long as the hook
Legs: rubber leg material, 2 pieces
On top: A round yellow (or other color) piece of sticky back foam cut with a single hole paper punch

As we settle into winter it’s that time of the year when we can sit with our fly tying vises and create with fur, hair, feathers, and yes, even artificial foam those fake imitations of natural insects that we know will fool the most selective trout next summer. For my contribution to our Newsletter this month I want to describe my journey with creating what has become one of the must have flies in my fly box.

I had hooks and rubber legs but did not have any foam for the body. I did however have a piece of foam pipe insulation. I cut a small rectangular piece of the black foam and found out that if it was tied really tight to the hook the thread would cut the foam, and if it was not tied tight enough the foam would not stay in place on the hook. After a lot of trial and error I finally got the foam attached and with the addition of four legs I had a smaller version of a Chernobyl ant.

At that time I was doing a lot of fly fishing guiding on the Brazos River Ranch and I was looking for a place close to the ranch where I could have clients stay overnight. I happen to find a bed and breakfast that was west of Tres Piedras on highway 64. To check it out the owners invited me, the manager of the Orvis shop, and another guide to come up and spend a night and do some fishing. We took them up on the offer and it gave me the opportunity check out a trout stream in the area and my new fly design.

When I would check out a stream I wouldn’t fish it because I would then waste to much time fishing and not cover enough of the stream. Between the three of us we had one rod and I asked them to try my version of the Chernobyl ant while I spent my time checking out the stream. After about two hours I returned to where they were and found them taking turns using the one rod to catch trout. They had only used the ant and they estimated the fly had caught over 50 rainbows. And I knew I had a fly that the trout really liked.

It became my go-to fly for catching the big rainbows on the Brazos, and as I found a better source of foam, over the years I made improvements in the design. I started calling it my chocolate cake fly because like people, who can’t resist chocolate cake, the trout could not resist the fly. It was like giving them a choice between peas and carrots (nymphs) or cake.

When I began to guide at Cow Creek Ranch I had the opportunity to try various variations of the basic design. In my fly box I now have blueberry pie, key lime pie, banana nut cake, and as a slight effort at tradition, a all foam hopper pattern. Clients were amazed at how the various foam dessert patterns worked and would want to purchase them and I started sending them to clients all over the country who had fished with me. The feed back I got from them was they worked in Texas for bass, for cutthroats in Yellowstone, for trout in New York, and even for brown trout in Tasmania. I like to fish with foam flies because I never have to dry and redress them to make them float, thus more time can be spent fishing.