Over the past several years, volunteers working with the Santa Fe National Forest (SFNF) have constructed twenty-seven beaver dam analogs (BDAs) on the Rio Cebolla where it flows through the large grassy meadow near the FR 376-Rio Cebolla crossing. BDAs, aka artificial beaver dams, are constructed of wooden posts driven from bank-to-bank across a stream in a picket fence pattern. Willow branches that are woven through the posts make a semipermeable barrier to the stream flow that slows water velocity, drops sediment, increases stream width, and raises the water table—just as with actual beaver dams.  Beaver do constant maintenance on their dams.  BDAs require human volunteers. 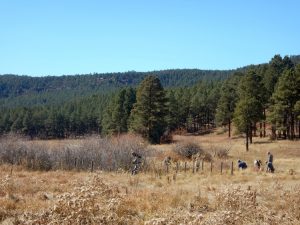 Twenty-one members of New Mexico Trout, Trout Unlimited, and the Albuquerque Wildlife Federation met on the Rio Cebolla on October 26th. It was a crisp, fall morning with incandescent golden leaves on aspen on the higher slopes and cottonwoods lower down.  Cecil Rich, the fish and aquatic program manager for the SFNF, had preplaced large bundles of coyote and other willow species along the stream. We formed into teams with some volunteers in waders working in the stream and others bringing materials or working from the bank. 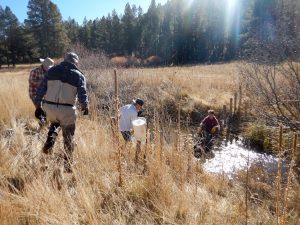 Willow weaves on some of the BDAs had deteriorated and needed patching. In some cases, the stream had scoured the bottom under the BDAs, allowing water to leak through unimpeded. We filled the holes with materials at hand.  Where the stream level had backed up to the top of a BDA we wove added layers of willow branches to raise the dam level.

Other teams used a hydraulic drill to plant willow cuttings along the bank. Willow branches will root and grow if the cut end is planted below the water table.  As long as the rooted end doesn’t dry out over the first few seasons the plant will survive and develop a robust root system.  Cecil had obtained specimens of at least four species of willow for planting, as a test of which ones might be best adapted to the specific conditions on that part of the Cebolla. 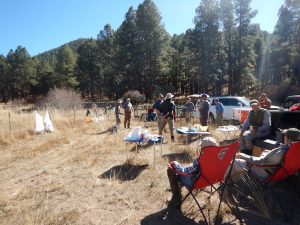 With so many volunteers, the work went quickly. By the time we broke for lunch (provided by New Mexico Trout) we had already completed a large fraction of the planned work. We continued in the afternoon until the remaining BDAs had been repaired and there were no more willow cuttings to plant.  It was a satisfying finale to our volunteer season in a beautiful setting with glorious fall weather in the mountains.