“A trout is too valuable to catch only once”. That quotation, from famous fly angler Lee Wulff, is the idea that brought more than forty New Mexico Trout members to the Rio Chama below El Vado Dam. There, on March 28th, Noah Parker, owner of Land of Enchantment Guides, conducted a workshop on the benefits that catch and release regulations would bring to the tailwater fisheries on the Rio Chama. It was a near perfect spring day as Noah described the initiative he is leading to persuade the NM Department of Game and Fish to establish four-mile stretches below Heron, El Vado, and Abiquiu dams as catch and release only.

The Chama below Abiquiu Dam is a pretty stream with clear water, good structure, and easy access. It is easy to imagine that, with catch and release regulations, it could become a trout fishing destination similar to the San Juan below Navajo dam. Given that it is only about a two-hour drive from Albuquerque, the prospect is even more appealing. 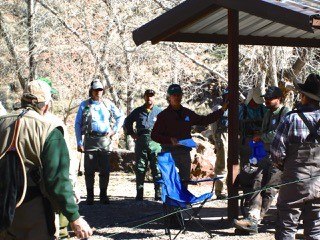 After the initial catch and release overview, Noah gave a nice introduction to fly selections, rigging, and general tailwater fishing techniques. People then dispersed individually or in small groups along a mile or so below the dam to apply what they had just heard. Noah, and his associate Jesse Lee, aided by several experienced NM Trout members, acted as roving coaches, giving advice and otherwise assisting anyone who wanted more hands-on help.

As the saying goes, “the fishing was excellent, but the catching was a little slow”. Bright mid day sun and lots of people on the river made things challenging, but people caught some fish and everyone had fun. The club provided an ample lunch with lots of opportunity for people to socialize and for new members to meet old hands. Fishing continued after lunch as people explored some excellent-looking water some distance below the dam. 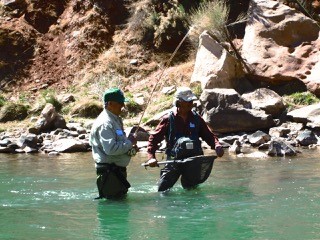 New Mexico Trout is indebted to Noah and Jesse for taking time from their busy guiding schedules to introduce us to a part of the Chama that was new to many of us. Land of Enchantment Guides supports NM Trout through generous, yearly donations to our Conclave, presentations at our monthly meetings, and as a general source of helpful advice to anyone who asks. A number of us have fished with Noah or others on his staff and the experience has been uniformly excellent.

New Mexico Trout as an organization has endorsed the Rio Chama Catch and Release Initiative and many of our members have individually signed petitions to that effect. It will take a lot of effort to overcome Department of Game and Fish inertia, but it will be worth the effort. Watch for future newsletter articles on other ways you can help.