Fly, Notes and Photo by Anthony Naples
Used by Permission
From the January 2015 Newsletter 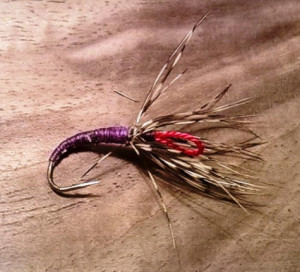 A video of Anthony tying this fly is at http://castingaround.anthonynaples.com/

Well another new year has somehow happened – they have a way of doing that don’t they? In spite of the inevitability of time’s (and life’s) runaway bulldozer, people annually attempt to grasp at the controls and so resolve to effect changes. Often these resolutions involve vices or more specifically the elimination of such. Overeating, smoking, sloth, procrastination, listening to modern country music are all among those vices which are worthy of our attention. I am going to propose, this January, another vice that we can eliminate from our lives – the fly tying vise. Well, maybe we can’t toss it away completely (I wouldn’t want to tie a deer hair bass bug, or size 26 midge without a vise), but perhaps it is not as necessary as we think. And within limits, it’s pretty easy to get by without it. Many who have followed tenkara in America, have seen the video posted by Tenkara USA of Katsutoshi Amano tying his signature fly sans vise, simply holding the fly in his hand. But rather than casting “no-vise” fly tying as “tenkara” or “Japanese” let’s just call it simple and fun – and avoid any attendant mis-characterization and controversy.

One day this last fall, I was looking at a box of old sewing thread that my mother in law had given to me – the spools were small and just the right size to fit easily into a bobbin holder. So I loaded up a spool, plucked some brahma hen hackle and tied a few for the day’s fishing – without a vise – and caught some fish. And it was simple, and it was fun, and it was pretty rewarding. I was being won over to the idea of “no-vise” tying as a real method and not just a gimmick. I have a long way to go and much more to learn and to experiment with regarding the technique – but it’s going to become a regular part of my tying.