Jump to a topic…

If you intend to tie a pattern you have never tied, from a book or magazine photo, you are entertaining the probability that your first try will be a honking, ugly, klunker.  Do not be defeated, demoralized, or embarrassed, for you will not be alone!  Every tier has had this experience.

Put another hook (one size larger) in the vice and copy the klunker, making adjustments to the new materials so it will look better.  It may take three or four tries before you get it to look right.  When you perfect the pattern, take a razor and slide it along the shanks of the klunkers to recover and reuse the hooks.

Do not start thread close behind the eye – it only makes for a large head that is difficult to whip finish.  Start the thread ½ inch back from the eye.

This manner of procedure assures the thread is covered all the way along and eliminates the need for matching thread color of the fly.  The only time the thread shows is at the head, which hopefully takes up a very small space at the eye.  One spool of black thread does it all!

2. Getting the Most of a Bobbin 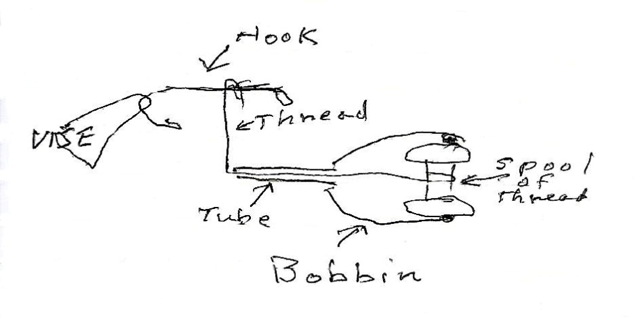 Frequently at the tie off point of body material, what I call the “Ker-Flop” move is used.  This is where the right hand holds the body material and the left picks up the hanging bobbin and throws it over the material and hook shank a few times in a flopping motion.

4. Feathers and Tying On

Assuming you are turning clockwise, the cheek near you will twist against the wings and not be much of a problem.  However, the cheek on the far side will tend to twist away from the hook.  You may be able to:

Do NOT cut hair butts until after whip finish. That allows holding up butts so whip can be done without tying any butts down over the eye.  See Hair Wings on Wet Flies.

When you tie hair on a hook, it tends to migrate around the shank and doesn’t stay on top to make a wing.  The wing should be the shank length.

After you have tied the hair bundle as in a Hair Wing dry fly, make several turns clockwise around the base of the bundle (not around the shank) to make the post.  If you have so many thread turns that it looks pregnant the parachute won’t be able to float the fly.

Buck tail is a solid hair as opposed to deer body hair which is hollow.  Buck tail will not stack in a stacker but generally tail is used on streamers and therefore the longer hair is used.

Since buck tail is not hollow it is difficult to spin.

You can make a more bulky body by tying on a bundle of hair as outlined above but this time point the hair forward and massaging it around the shank.  Then trim the butts and fold the points back over the butts to tie down.

Start thread ½ inch back from eye.  Tie in a length of tinsel long enough to wind back to bend and reverse back to tie in, keeping each piece of tinsel next and close to the previous turn.

If you want a thicker body, do the above with thread for a base, keeping each turn of thread tight but not overlapping the previous turn.  Then wind the tinsel back and forward to tie off.

The whip finish is NOT a do-all-end-all!

Note:  If the hook is near or in your eye – seek medical help immediately!

Hooks are much easier to take out if the barb has been turned down or flattened before use.  When a hook penetrates your skin, it makes a tunnel that can be used as a reverse path to extract the hook through without causing any further damage to the skin.  This method is illustrated in the rear hook in the following picture.

Take a length of string or line and thread it through the inside of the bend of the hook. Use the thumb and index finger to hold the hook eye down against the skin.  While holding down the eye, pick up the two ends of the string through the hook bend and jerk backward and down.

This should pull the hook back through the tunnel it made going in and with little pain.

The hook in the foreground shows what will happen if the hook eye is not kept depressed.  The string will lever the shank upright and backward which forces the hook point further through the skin.  This makes for a much more painful and tedious procedure to remove the hook.