By Tina and Mike Stallard
From the September 2017 newlsetter

Once a year, we take a guided float trip on the San Juan as a treat to compensate for Albuquerque traffic, demanding bosses, and daily chores. We usually take our trailer and camp for a few days in Cottonwood Campground, a lovely and quiet spot near the river and less crowded than the campground near the reservoir.

This year we booked a trip with Resolution Guide Service and a dinner at Rainbow Lodge, one of NMT’s sponsors. We planned the trip for early September, a beautiful time for the San Juan, with medium-low flows of 700 cfs (normal for this time of year) and cooler weather, but always with a chance of afternoon thunderstorms. 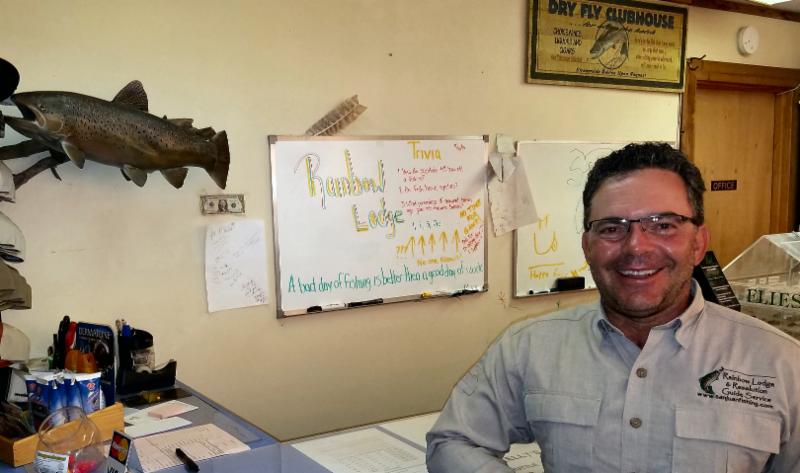 We met Steve Gill, owner of Resolution Guide Service and Rainbow lodge, and learned that there should be very few boats on the river this Sunday, after a very busy few weeks.

Our guide Brad, an experienced guide of many years, a slim and energetic, laid back man with the countenance and eye of an observant and knowledgeable fisherman, had us on the river shortly thereafter. With so few boats he was able to position us just below the tailout of the braids and Audie’s Run on the upper end of the Texas hole.

Fishing with a small San Juan worm of Brad’s design and construction, with a small midge emerger below, we were soon into fish and kept pulling them out every few minutes. These were healthy and colorful fish, better looking than we’ve seen in past years, a testament to the improvements in the management of this river. The catch-n-release went on for over an hour, when the action started to taper and a few more boats started sidling up to our zone. Brad floated us down the Upper Chutes fishing along the way, anchoring occasionally when he spotted feeding fish holding in riffles, runs, and holes. 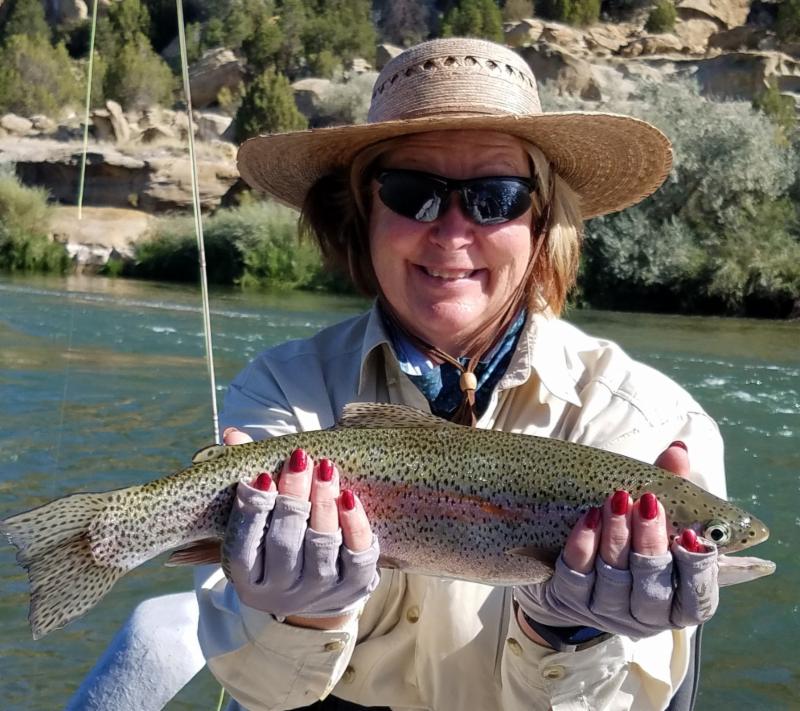 Resuming our fishing now with a baetis and midge emerger, we kept hooking up with plenty of rainbows and a few browns as we got into Baetis Bend and Chuck’s Corner. At one point Tina hooked a fish which looked fairly large and was putting up a fight running up and down the river and back and forth across the boat. As it came into view, Brad got quiet, jumping out of the anchored boat and into the shallow water with his net. He was not letting this one escape, a beautiful and good sized rainbow.

We continued fishing down the river, the action slowing a bit through Death Row and Cannon Run. As we passed Simon Canyon, we were happy to see much less silt than past years, and some nice pockets behind the large boulder structures placed into the river by Game and Fish. We caught a few as we floated the rest of the way to take out at Crusher Hole.

After a nap and change of clothes at the camper, we headed to Rainbow Lodge for our dinner reservations. Steve, Steve’s father, and another cook prepared a hearty meal of grilled New York strip steak, salad wedge with Blue Cheese and bacon, sauteed asparagus, baked potato and grilled pineapple with ice cream for dessert. We enjoyed learning about Steve’s journey to become owner of the Guide Service and Lodge, and his father’s story of living and working in Gallup for many years. The conversation went late into the evening, and our hosts were engaging and entertaining. Steve also showed us the rooms they rent at the Lodge, very large 2 bedroom apartments that could easily sleep 4, maybe even 6. They would be a great deal for a family, or a guys (or gals) trip. For more information about the guide service or the lodge, visit their website http://www.sanjuanworm.com/