by Noah Parker, reprinted with permission from https://loeflyfishing.com 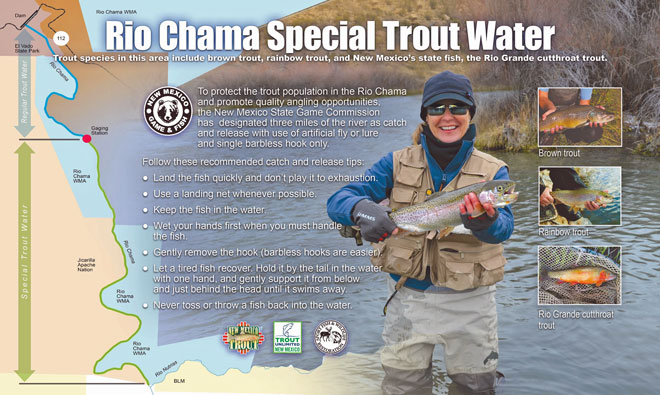 With the beginning of the new licensing period on April 1st, 2017, the new catch and release area on the Chama River below El Vado Dam was implemented and became a reality. The New Mexico Game and Fish Commission (NMDG&F) approved catch and release regulations on this section of the Chama River at its November 17, 2016 meeting in Grants. The new regulation, as written by NMDG&F staff, applies to a three-mile stretch of the river that starts 1.3 miles below the El Vado Dam. The first 1.3 mile section of the Chama directly below the dam was left out of the proposal because it includes the Coopers El Vado Ranch and areas upstream that are popular with “catch and keep” anglers fishing on the Chama.

The new catch and release area begins about 1/4 mile below Cooper’s where the gauging cable crosses the river and then runs downstream to the confluence of the Rio Nutrius/Canyon – a distance of about 3 river miles. Anglers willing to walk a moderate distance downstream from Cooper’s should have the opportunity for larger, stream-bred trout. The new catch and release regulation for this section of the Chama River mandates that all fish must be released with a tackle/gear restriction of using only single barbless hook and artificial lures. At some point in the next few weeks signage will be installed on the riverbank at the upstream and downstream boundaries of the new catch and release area (the picture above is of the signs that will be placed on the upstream boundary). [NMT sponsored and helped install these signs!]

All of here at Land of Enchantment Guides would like to thank all of the individuals, organizations and business who supported and helped to make the catch and release area on the Chama a reality – we couldn’t have done it without your efforts. Hopefully over the next few years, this section of the river will become the great fishery that it has the potential to be.