Hint: It’s Not Because They Eat Them 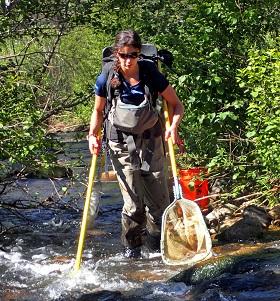 Brown trout tend to replace Rio Grande cutthroat trout (RGCT) where they occur together in New Mexico streams, not because of predation, but because brown trout outcompete RGCT for food and habitat. That is the conclusion of research recently completed by Lauren Flynn for an MS degree in Fish, Wildlife and Conservation Ecology from New Mexico State University. This result was independent of water temperature for a sample of eight New Mexico streams in the Santa Fe and Carson National Forests. Ms. Flynn’s results contradict a belief, popular among anglers, that as they age, brown trout switch from an insect diet to eating other fish, such as RGCT.

Two hypotheses drove Lauren’s research. One is that interspecies competition for resources at the population level favors brown trout (BT) over RGCT. The other hypothesis is that the brown trout advantage is even greater in warmer streams.

: The eight streams in the study were either sympatric, i.e., containing both RGCT and brown trout (Columbine, Frijoles, Tanques, and Vacas) or allopatric, i.e., containing only RGCT (Alamitos, Powderhouse, Policarpio, Jacks). The mean daily July stream temperatures as measured by long-term data loggers were between 9°C for the coldest and 14°C for the warmest. Each category was represented by two streams, giving eight experimental sites, four experimental conditions, replicated once each, as shown in the following table.

The researchers electroshocked fixed 300m stream lengths in multiple passes over the summer and fall in 2017 and 2018 in a capture/tagging /recapture strategy to measure trout abundance, length, and water temperature. The diets of a statistical sample of the fish were determined by benign gastric lavage. Separate measurements determined benthic (bottom) and drift food species and abundances.

Importantly, the data on species and abundance of food available to the fish and measurements of what they actually ate (from stomach pumping), gave the contributions of individual prey species to fish growth. In the mixed population streams (sympatric) differences in prey species consumed by BT and RGCT gave a measure the success of the two populations in competing for food.

The research also investigated the effect of water temperature on the secondary production. Increased temperature increases trout metabolism, which increases growth and biomass, if prey abundance isn’t limiting. If food is insufficient a trout population would be expected to decrease with increasing water temperature, particularly if another species is restricting access to prey.

Conclusions and Discussion: Ms. Flynn’s research shows that brown trout outcompete RGCT for food resources when they inhabit the same water. This implies that there are no management strategies to “slow the exclusion of RGCT when they are sympatric with brown trout” (quoted from her thesis defense). Thus, early detection and eradication of brown trout are important to increase the survivability of RGCT in mixed populations.

Fish barriers to separate BT and RGCT populations are beneficial on balance.

Intact, functioning riparian areas are very important food sources for trout and they need to be protected. This last point should to be emphasized. Protection and restoration of flood plains and riparian areas along trout streams is a primary focus of New Mexico Trout’s conservation program. If you want healthy trout populations, they need to eat, and terrestrials are significant part of their diets.