A working group comprised of individuals, environmental, and recreation groups is developing a proposal to the NM Water Quality Control Commission to secure greater protections for the upper Rio Grande, the Rio Hondo, and Jemez headwater streams. The group, which includes Amigos Bravos, TU, Jemez Pueblo, and others, has the support and encouragement of the new NM Office of Outdoor Recreation.  The expanded protection will come from designation of these streams as Outstanding National Resource Waters (ONRWs). New Mexico Trout is supporting the application. 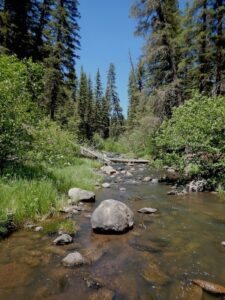 ONRWs are streams, lakes and wetlands that receive special protection against degradation under the federal Clean Water Act and New Mexico’s State Water Quality Standards. This is the highest level of protection available to surface waters under New Mexico’s Water Quality Standards. Headwater streams in New Mexico wilderness areas received ONRW status in 2010 in response to a proposal by Amigos Bravos, Wild Earth Guardians, and New Mexico Trout. This new proposal would extend protection to streams outside wilderness areas that have high water quality and exceptional recreational or ecological significance.

ONRW designation does not prohibit existing traditional land-use practices such as grazing and acequias.  However, it does not allow new or increased sources of pollution.  Thus, the designation guarantees that the water quality in such streams will remain of high quality for future generations.

The proposal is still being written and details aren’t completely set.  At present, the part of the Rio Grande being proposed extends from the Colorado boarder to the junction with the Red River.  The Jemez streams are the East Fork of the Jemez from its origin to Battleship Rock and the San Antonio from its origin to Highway 376. These reaches may be adjusted as the proposal is further developed.  I am advocating for the inclusion of the Rio Guadalupe from Porter’s Landing to the Gilman Tunnels.  I also believe that an excellent case can be made for ONRW status for the Rio Cebolla from its headwaters to Porter’s Landing. 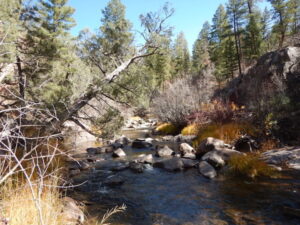 A separate proposal to secure ONRW status for the upper Pecos river is further along in the process.  Its advocates have prepared a very nice web page (ournmwaters.org)  that explains the benefits of ONRW status and why it is important for protecting stream water quality. The information on the site is relevant to the present ONRW proposal and is a good source for background on ONRWs.

Expressions of support from individuals, such as New Mexico trout members, who know and care about these Jemez streams, the upper Rio Grande, and the Rio Hondo will be an important part of the ONRW application.  I will be asking you all for letters and testimonials once the proposal is ready for submission.