by Ron Loehman, Conservation Chair
from the December 202 newsletter

Last month, several environmental groups sponsored an on-line Beaver Summit, which was an in-depth, eight-hour workshop on all aspects of beaver life and behavior and how they benefit the environment. The presentations were by national and local experts in the field and they are now available on-line here. The presentations were fascinating and I highly recommend them. You can just dip in and sample the material and learn a lot without watching the entire eight hours.

When Europeans first came to North America, beaver were everywhere. Accounts by those early writers describe that almost all river valleys were sequences of beaver ponds, one above the other until the gradient was too steep for their dams. Flow pulses from runoff and rain events were captured by the dams, and the water was slowly released over time, reducing floods and providing higher flows in dry periods. Marshes were created when silt and sediment deposited behind the dams, raising the water level and causing it to spread beyond the riparian zone. The dams and silted-in ponds left behind when the beaver moved on eventually evolved into lush meadows.

Trapping for the fur trade accelerated in the first half of the 1800s until the beaver were almost eliminated. Nowadays beavers are much rarer and those that remain are frequently considered a nuisance by many because their dams flood areas that cause problems for land owners and public agencies. The usual practice is to eliminate the offending beaver by lethal means. 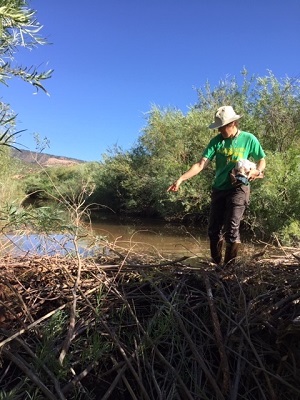 Researchers and environmentalists are coming to recognize that beavers can be a very effective means to improve stream quantity and quality, wildlife habitat, and the extent of riparian areas. In our area, we encounter beavers in some streams and we see evidence of their past presence in mountain meadows left by their old dam building. There are a few active dams on the Rio Cebolla above Porter’s Landing, on the Rio de las Vacas and down in the Rio Guadalupe canyon. Our volunteer work building Beaver Dam Analogs on the Cebolla below Lake Fork Canyon is an attempt to jump start beaver colonization on some old beaver meadows. There are beaver on the Rio Grande through Albuquerque, but they have adopted a different lifestyle that doesn’t involve dam building and has no effect on the hydrogeomorphology of the Rio Grande. [Note: Hydrogeomorphology is the technical term for the interactive effects of water and geological forces on landforms.] I’m sure our readers have encountered beaver activity on streams that they fish. I encourage you to imagine what our watersheds could be like if beaver recovered to even a fraction of their presence.

This short summary doesn’t do justice to the wealth of information at https://nmbeaversummit.org/. Check it out.