Web editor Announcements, Conservation August 31, 2015January 24, 2018
by Jerry Burton
From the July/August 2015 Newsletter
On October 1st, one of my favorite trout fishing places will change management. The Valles Caldera National Preserve will cease to be managed by a board of trustees, and will be managed by the National Park Service. I’m not sure what the change will bring to the trout fishery, even though I attended one of the public listening sessions held by the Park Service.
I have had experience as a U.S. Fish and Wildlife Service biologist in working with the Park Service in managing a trout fishery in Great Smoky Mountains National Park. The Park provided the Service with office space at their headquarters and that was about all. Vehicles, equipment, and salaries were provided by the Service. My impression after several years of working with them was that the trout fishery was not a high priority – campgrounds and tourist attractions were. 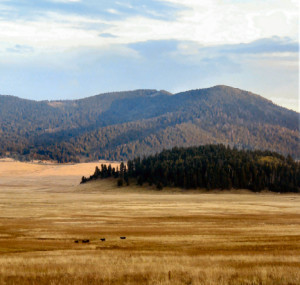 The Park Service followed State fishing regulations, but the states provided no fisheries management. The same situation presently occurs at some of the premier national parks such as Glacier and Yellowstone. However, I get the impression that at the Caldera the New Mexico Department of Fish and Game will play a major role in management of the trout fishery. My hope is that it will continue be an outstanding trout fishery.
Over the years I have found that most people don’t know a lot about the Caldera and how it came to be what it is today. In 1854, after the United States and Mexico war, in order to encourage people to settle in New Mexico, Congress authorized the granting of 160 acres of land to anyone who would settle in New Mexico. Many Anglo-Americans took advantage of this offer and settled in the Las Vegas area. The problem was that the land these people settled on was part of a land grant given to the Cabeza de Baca family. Rather than have the courts resolve the situation the Baca family told the U.S. Survey General that they would accept in exchange for the Las Vegas property their choice of five parcels of land, each consisting of 100,000 acres from the public domain. Thus, in 1860, they chose as their first choice the Caldera, Baca number 1.
Over time most of the parcels were sold, as was Baca Number 1. The last owner before it was sold to the Federal government was Andrew Dunigan who before his passing told his sons to have the property put in public ownership. The rest of the story is very interesting and will be continued in the next newsletter.