From the August/September 2015 Newsletter 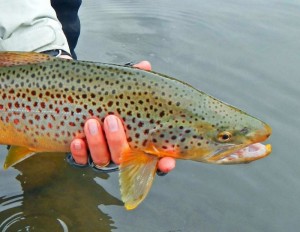 The New Mexico Department of Game and Fish (NMDGF) has been executing a program to stock larger fish in local waters over recent years. The aim of the program that grows larger trout at several of its hatcheries is to keep anglers excited about the sport. The idea for the program came from the tremendous positive responses the department has received from anglers who had caught big trout, stocked in numerous fishing areas during the past few seasons. Many of those fat trout were the first generation raised at the Los Ojos Fish Hatchery after it had been closed for decontamination to eliminate whirling disease a few years ago. About 1,000 fish had to be held over at the facility to ensure they were free of the disease. They grew to around 17 inches each before being stocked in nearby Hopewell and Canjilon Lakes and the Chama River. This year, fish hatcheries at Red River and Los Ojos will raise thousands of fish in the 15 to 17-inch range for stocking in about 20 selected lakes and ponds.   Some of those big trout were stocked in the Rio Costilla and Red River, fish hatchery ponds such as Seven Springs, and places like Tingley Beach. Even remote Charette Lakes, far out on the plains of eastern New Mexico, got a load of the big fish.