Peralta Creek arises at the top of the ridge directly south of the Valles Caldera and flows down through a deep canyon toward the Rio Grande. In 2008 New Mexico Trout did several volunteer conservation projects on Peralta Creek to help protect its small population of native Rio Grande cutthroat trout. The middle canyon, where we worked was lush and green, with vegetation characterized as mixed wet conifer type.

In 2011 our plans for continued work on Peralta Creek were derailed by the Las Conchas fire, which was ignited by a downed power line near the headwaters of the creek. Because of the extent and severity of the fire, we all assumed that the entire Peralta watershed had been reduced to sterile ash. Until recently, the danger from fallen and falling dead trees and eroded dirt roads prevented access to check on conditions at the canyon bottom. 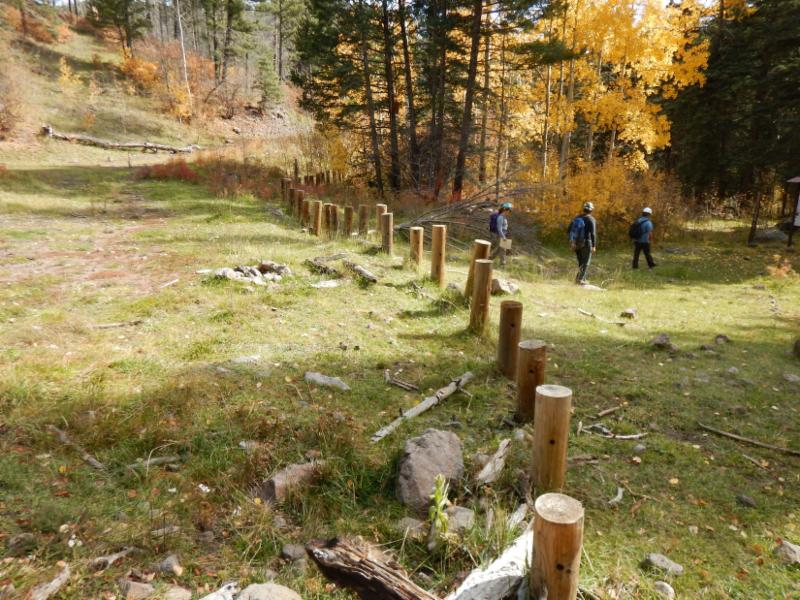 In mid-October, I accompanied several people from Wild Earth Guardians and the Santa Fe National Forest on a survey of current conditions in the middle reach of Peralta Canyon. Work crews had previously gone in to clear the access roads of a large amount of fallen timber and with 4WD we were able to get to within about a mile and a half of our 2008 worksite. We hiked the rest of the way in.

To my surprise, we found that the canyon and the creek were mostly unaffected by the fire. Although the mesa tops were severely burned, the fire did not penetrate to the canyon bottom. The main evidence of the fire down there were the snags from downed trees that had fallen down from the burned upper slopes. The vehicle barriers we built in 2008 are intact. About two thirds of the elk/cattle exclosure we built is still standing. The creek itself looks better than I remember from 2008. There is more water, lots of pools, and a largely gravel and rock bottom. I turned over rocks in the creek and found caddis, mayfly, and stonefly larvae. However, I did not see any fish. All of us in the group looked really hard for some evidence of fish in about a mile of stream, but none was found.

Peralta Creek was once habitat for native Rio Grande cutthroat trout. In my opinion, it is now an excellent candidate for reintroduction of native trout by the NM Game and Fish Department. We will be proposing this in future meetings with the Department.